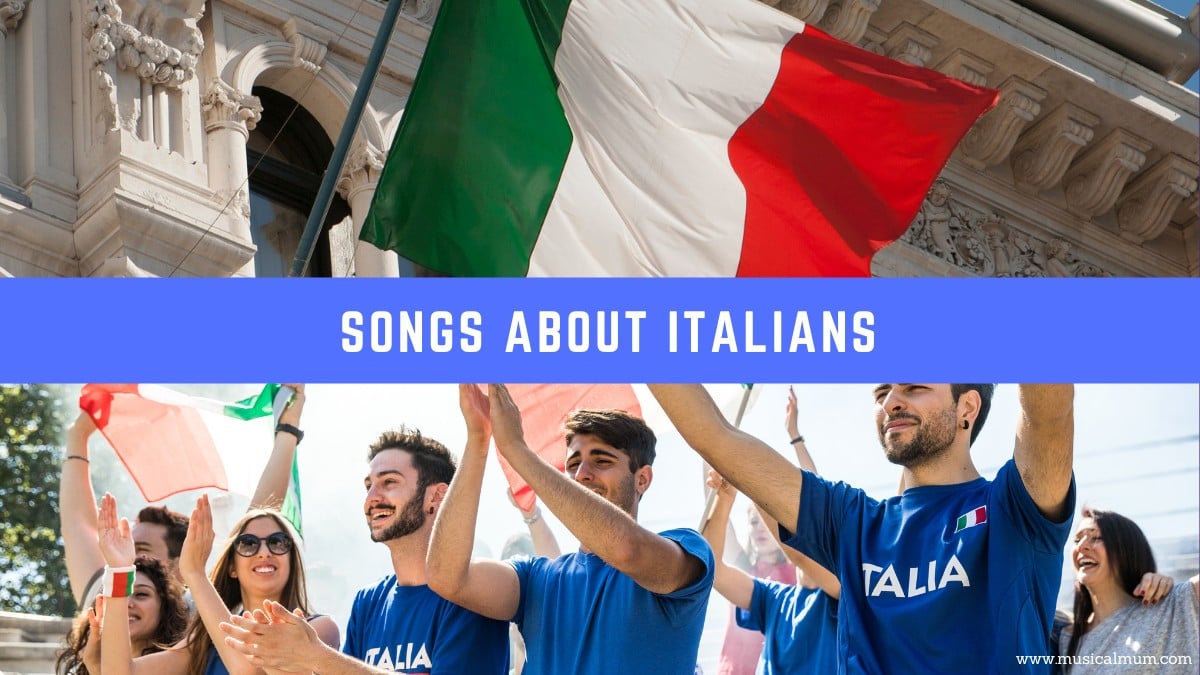 Starting off the list is this fun and lively tune by Bette Midler. “Mambo Italiano” is an ode to the Italian people and their love of life.

The song celebrates all things Italian, from the food to the music to the fashion. It was released in 2003 as part of the Bette Midler Sings the Rosemary Clooney Songbook album.

Here’s another upbeat song about Italians, this time from rapper Geezygoinham. “Italian Job” is a feel-good track that celebrates the Italian culture and lifestyle. The song was released in 2018 as part of the album of the same title.

3. “Scenes from an Italian Restaurant” by Billy Joel

Billy Joel is a popular musician from New York City. “Scenes from an Italian Restaurant” is a song about two young lovers, Brenda and Eddie. The song describes how their relationship was perfect and how it eventually ends. It’s a very melancholic song, but it’s also a very beautiful one.

Next on the list is “Little Italian Boy” by Grace Gilmore. This song is about a woman who can’t help but fall in love with an Italian man because of how handsome and charming he is. It’s a cute and light-hearted song released in 2020 as part of Gilmore’s album of the same title.

If there’s a song dedicated to Italian boys, there has to be one for Italian girls as well. Rod Stewart’s “Italian Girls” is about how beautiful and passionate Italian girls are.

It’s a fun and catchy song that will make you want to dance along. If you know an Italian girl, this would be the perfect song to dedicate to her.

Featured in the film “Nine”, “Be Italian” is a song sung by the character Saraghina. This is a rather fierce and sensual song about how Italian women are unafraid to be themselves and their sexuality.

It’s a great song to listen to if you want to feel empowered and confident. You can stream this track on all music platforms out there.

“Italian Girl” by Andy McCoy is another sensible track on this list. It’s a song about a man who wants to make love with an Italian girl.

He admires her beauty and passion, and he can’t help but be attracted to her. This song is definitely NSFW, but it’s a great track if you’re in the mood for some sensual music.

Next on the list is “Italian Girls” by John Gorka. This song is about how Italian girls are the most beautiful in the world.

He sings about all the things he loves about them, and it’s a great song to listen to if you’re feeling romantic or if you’re missing someone special. You can find this track on the album Land of the Bottom Line released in 1990.

But if you’re in the mood for something naughty, this track would be perfect for you. You can find it on the album Fashion Nugget released in 1996.

Allan Sherman’s “America’s a Nice Italian Name” is an appreciative song about Italy. It talks about how they might sound funny to some people, but they’re really just like everyone else.

The song is light-hearted and fun, and it’s a great way to show your love for Italy. You can find this track on all music platforms out there.

“She Loves Italian” by OMC is a song about a woman who loves Italian men. She finds them to be very handsome and charming, and she can’t help but fall in love with them.

It’s a fun and catchy song that will make you want to dance along. You can find this track on the album How Bizarre released in 1996.

12. “Italians Do It Better” by Alesha Dixon

Up next is “Italians Do It Better” by Alesha Dixon. This 2008 song is a bit of a ode to the prowess of Italian men.

Dixon sings about how she’s dated many guys from different cultures, but none of them could compare to her current Italian beau. You can find it on the album The Alesha Show released in 2008.

13. “I’m in a Band With an Italian Drummer” by Bruce Dickinson

“I’m in a Band With an Italian Drummer” is a light-hearted song by Bruce Dickinson, the lead singer of heavy metal band Iron Maiden.

The song is about being so great at what you do and being in a band with an Italian drummer. It’s one of his most popular tracks released in 1996 as part of the Skunkworks album.

The next song is “Italian Summer” by Stevie Nicks. This 2011 track is full of imagery, making it the perfect addition to any summer playlist.

This 2021 rap song by Brooklyn-based artist LTtheMonk can be found on the On The Wall album. It’s not clear as to what the message of this song is, but there are lots of drug references. If you’re a fan of underrated rap tracks, this will make a great addition to your playlist.

Here’s another ode to all the lovely Italian ladies out there. This 1982 disco classic by Hall & Oates is still popular today and will definitely get you moving. You can find it on the H2O album and can be streamed on all music platforms out there.

“Italian Gangsta” is a track off of Rashin’s 2020 album of the same title. It features American rapper Shadow and has a more aggressive and dark tone than the previous two songs. If you’re looking for something different, give this one a listen.

Next on the list is a folksy tune about an Italian woman. “Big Italian Rose” is a beautiful ballad that will tug at your heartstrings. You can find it on Fred Small’s album No Limit.

It’s an empowering song about following your dreams and not letting anyone get in the way. It can be streamed on music platforms like Spotify and Apple Music.

19. “See That You’re Born an Italian” by Lena Prima

“See That You’re Born an Italian” is a fun and upbeat track sung by the late Lena Prima, daughter of legendary musician Louis Prima. It’s a celebration of all things Italian and is sure to put a smile on your face. You can find it on the album Prima La Famiglia released in 2019.

Wrapping up this list is “Italy” by UK rapper AJ Tracey. This 2015 track is all about his love for the country and how he’s proud to be of Italian descent.

It’s a feel-good song that will make you want to book a trip to Italy ASAP. You can find it on AJ Tracey’s The Front album which can be streamed on all music platforms out there.

As you can see, there are quite a few songs out there about Italians. Whether they’re about Italian-American culture, love affairs with Italians, or just good old fashioned fun, these songs show that the Italian people and their culture are truly appreciated by many.

So next time you’re feeling nostalgic for Italy, or just want to have a good time, put on one of these songs and let the good times roll!